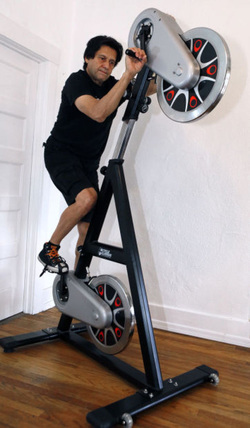 Some 20 years after getting the idea for a new kind of workout bike, Tucson native Marko Hansen has brought his Cycle Climber to market — with an assist from his beloved Arizona Wildcats.

In his living room decorated with a University of Arizona clock and other Wildcat items, Hansen recalls how he drew inspiration for the structure of the Cycle Climber — which works the arms and legs at once — from the Arizona “A.”

“I was an all-gung-ho Wildcat fan, and then one day it just hit me like a bolt, like of course the A-frame — why didn’t I think of this?” Hansen said.

In addition to the machine’s A-frame, which allows the vertically designed machine to save space horizontally, Hansen also designed it in black and silver, the colors of his NFL favorite Oakland Raiders.

While many people solely cycle and then do arm workouts separately, Hansen’s machine incorporates two independent flywheels in one machine to offer two workouts at the same time.

“Why would somebody do a half hour of spinning and then do 20 minutes on a Krankcycle when you can just do both?” Hansen said. “Kill two birds with one stone and it feels better.”

Hansen’s story started in 1992 while he was riding his bike to work in Los Angeles.

During his 11-mile journey, Hansen had to pedal up a one-mile steep hill and found himself standing off the bike’s seat for maximum power. At the same time, Hansen envisioned using his arms, reaching for the sky, trying to get up the hill.

Soon after, Hansen quit his job and pursued his vision of what he then called the Gyro Glide.

Weighing in at more than 400 pounds, the first model was not very user-friendly, Hansen said.

But when Hansen used his first prototype for five hours a week, he got down to his lowest weight ever in a matter of months.

By 1997, when the Wildcats had their NCAA Championship run, Hansen designed his machine’s A-frame, which was sleeker and easily adjustable.

In his 1997 model, the flywheels were black and white BMX-like tires. For a while, this was the model he showed off at different trade shows trying to appeal to potential customers.

“And there I was saying, ‘Quit spinning your wheels on half a workout and do the total-body thing,’ ” Hansen said. “So here I’m insulting spinning, which was huge in ’97.”

In 1998, Hansen signed a licensing agreement with exercise-machine giant Bowflex, but the deal was canceled in 2002 when Bowflex decided to pursue another machine instead.

Hansen worked several jobs to keep his product marketable. His wife and business partner, Zhen P. Hansen, is from China. Her sister’s fiancée was an engineer in China who could create an engineering team to help further the Cycle Climber.

“I was lucky to have that access over there,” Hansen said.

After a couple more changes were made to the product, it was ready to go to a trade show earlier this year in Las Vegas.

Hansen has no degree or certification in fitness, but he’s not new to the fitness scene. Before starting up his business, he spent hours at boxing gyms, did the 49-mile Grand Canyon rim-to-rim hike in 24 hours and ran in the 1989 Los Angeles Marathon.

For now, Hansen says he will continue to work as an independent and sell his product solely online. The Cycle Climber retails for $1,795, with occasional deals for multiple units.

“It’s such a big decision to go retail,” Hansen said. “When you get into retailing, it opens up a lot more headaches.”

Though the Cycle Climber is primarily intended an in-home workout machine, one has been installed at a gym in Santa Monica, Calif.

While at a show in the city three months ago, Hansen called 220 Fitness hoping to show off his machine. When 220 agreed to check it out, Hansen hauled the Cycle Climber over in his truck that afternoon.

220 Fitness has one Cycle Climber in the gym and it is used daily, manager Brett Beck said.

“I put them (members) on it for one minute and they’re exhausted,” Beck said. “You just don’t have another piece of equipment like it.”

Hansen said it’s hard to sell his product because of its uniqueness. It’s not just a stationary bike and it’s not just a climber.

“It doesn’t fit in a category,” Hansen said. “This cycle climbing should be its own category.”

Hansen hopes that with the increasing popularity of boxing gyms, boot camps and training programs like CrossFit, his product that would do well in these areas will be a success too.

Customers will not see a traditional infomercial for the Cycle Climber, but instead a sitcom video that was released on the company’s website this week.

Hansen hopes the honest and relatable approach will be more of a hit than traditional marketing ploys.

This article appeared in the Dec. 2, 2013 Arizona Daily Star.

Ashley Powell is a NASA Space Grant intern at the University of Arizona and the Star. Contact her at apowell@azstarnet.com or 573-4674.

Remember your last bicycle ride? Your legs were pumping furiously while your arms…

…Well, your arms were just along for the ride.

Enter Tucson inventor Marko Hansen. He’s going to give your arms and legs a crank-turning workout.

Marko has just unveiled a dual flywheel climbing machine called the CycleClimber. It has literally been 20 years in the making.

Marko first got the idea for his machine during early morning bicycle rides in Southern California. It was the early 1990s, Marko’s route included a killer hill, and the exertion got him thinking about how his arms could help power him up the incline.

The first CycleClimber prototype weighed more than 400 pounds and wasn’t user-friendly. It wasn’t until 1997, during the University of Arizona men’s basketball team’s national championship run, that Marko decided to redesign the CycleClimber frame. It became a sleeker, easily adjustable “A” frame, inspired by the “A” in Arizona.

With “A” frame in hand, the University of Arizona alum went in search of licensing agreements with big companies. He signed one with Bowflex in 1998. However, Bowflex’s priorities changed and the company canceled its agreement with Marko in 2002.

He was not deterred by the Bowflex decision. “Timing is everything,” says this intrepid inventor, who kept refining his creation for another decade.

Marko and his wife, Zhen, hosted the official Tucson launch on Sunday, August 4. It doubled as a CycleClimber video shoot at the Beowulf Alley Theatre.

Although the latest video is still in production, here’s one that was shot back in February. And if you’re looking for a new workout challenge, you can purchase a CycleClimber for the special introductory price of $1,595.